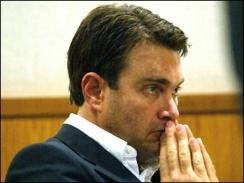 Andrew Luster (born December 15, 1963) is the great-grandson of cosmetics giant Max Factor, Sr. and an heir to the Max Factor cosmetics fortune. Andrew Luster grew up in Malibu, California and attended Windward School in Santa Monica. Andrew Luster had been supported by a $3.1 million trust fund as he traveled and surfed at various beaches. Andrew Luster was convicted of a series of rapes in 2003.

In 1996, 1997 and 2000, Luster was accused of giving three women GHB, a known date rape drug, and raping them while they were unconscious. Luster was brought to trial in 2002. Soon afterward, police officers found videotapes of Luster raping the women in question, including one tape labeled "Shauna GHBing."[1] In January 2003, while on trial for rape, Luster left the country and was declared a fugitive from justice by the judge. Although his attorneys attempted to halt proceedings until he could be located, the judge ruled that Luster would be tried in absentia.

The trial went ahead without him and on January 22, after two days of deliberations, the jury found Luster guilty on 86 of 87 charges against him (many of which had been added to California state law in the wake of the 1996 federal drug-induced sexual assault law) and deadlocked on a single poisoning charge.

The California Court of Appeal refused the appeal his attorneys filed on his behalf, ruling that as a fugitive from justice, Luster had flouted the court's authority and had thus forfeited his right to appeal. The California Supreme Court and the United States Supreme Court later refused to overturn this ruling.

During his flight, Luster found his way to Puerto Vallarta, Mexico where he lived under the assumed name David Carrera, surfing and partying. He was captured by bounty hunter Duane "Dog" Chapman, his son Leland Chapman, Tim Chapman, and two TV crewmen in a noisy scuffle on June 18, 2003 and was then taken into custody by Mexican authorities. The next day, Luster was returned to the U.S., and imprisoned. Chapman was subsequently arrested for deprivation of liberty because bounty-hunting is prohibited by Mexican law, a charge that was ultimately dropped in August 2007.

Andrew Luster is currently serving his 124-year[5] prison sentence in Mule Creek State Prison in California. Because his crimes harmed other persons, Luster must serve 85 percent of his sentence before being eligible for release with time off for good behavior. Andrew Luster will not be eligible for release until October 2108 — virtually assuring he will die in prison (he would be 145 years old when he is eligible).

Andrew Luster filed a federal habeas corpus suit as the final possibility of getting his case reviewed by another Court on appeal, which was rejected in late 2007.

Two of the victims won civil lawsuits against Andrew Luster, who was ordered to pay a total of $39 million. Their attorneys are still trying to wade through the Luster/Factor investments to determine how much their clients will actually receive. Luster subsequently sold most of his property and declared bankruptcy.

Andrew Luster has two children with ex-girlfriend Valerie Balderama: a son, Connor, born in 1991, and daughter Quinn, born in 1994. That's all story about Andrew Luster was quoted from Wikipedia.
Label: Kisah Nyata