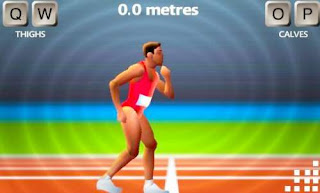 Did you already play QWOP Game? Before playing you should know in advance about QWOP Game. This game is the latest radgoll game based flash games. QWOP game developed by Too Many Ninjas and Top Spinner. Qwop games believed to be the hardest flash game ever made, so this game immediately famous because everyone wanted to try to prove it. But you need qwop strategy to beat this game.

QWOP game is also a Olympic running simulation game that can be played only with four keys. In QWOP game you’re playing an Olympic athlete named Qwop who participated in the sprint race of 100 meters in an Olympic Games. To become a champion, qwop should be able to run as far and as fast as possible. Although it look easy but this game is not as easy as it looks. Therefore you have to play it a few times to understand how to play this qwop game.

For play QWOP game, there are four buttons that can be used, namely the Q, W, O and P. From this it can be known why the game is called QWOP game. Gamers must strive for Qwop could run as far as possible without falling. What makes the qwop game difficult is the difficulties to balance the presses of the Q, W, O, and P for runners could run fast and far. If late pressing one button, then the runner will fall.

Qwop game also involves emotion. Because if the runner falls, you must start the game from scratch. If this happens once, it does not matter. But if the runner falls many times, and this means that you fail and have to start from scratch, you will definitely feel upset. And every time you try again you fail, your emotions will increase. And then you’ll leave qwop game with a sense of exasperated.

If you need help, there is the question mark button you can press in the top left corner of the screen game. Or if you feel you will lose, you can simply restart by pressing the R key. As quoted from Urban Literature magazine.

QWOP Games is a flash game without requiring a lot of resourses. You should try to play QWOP game.
Label: Games